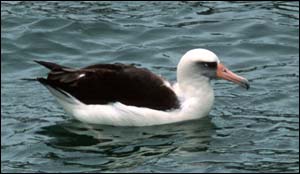 "Al" (or Alice?) is the Laysan Albatross that inhabits Point Arena Cove during the winter months. Typically Al arrives in the area late November or early December, stays for two to three months and then leaves in February or March. Al has done this regularly since the winter of 1994, when first recorded by Todd Easterla & Jim Booker.

Typically albatrosses come to land only to nest, and then in colonies on islands such as the Hawaiian chain for the Laysan Albatross, so Al's behavior is very unusual. The bird is probably not a breeder because it shows up at Point Arena at the beginning of the Laysan Albatross breeding season and leaves at the season end. As Ron LeValley, biologist and specialist in marine birds says: "Al is somehow mixed up."

Ron guesses the bird goes to the Gulf of Alaska for the summer where most Laysan Albatrosses go. However, to confirm this would require placing a data logger on Al's leg and then retreiving it a year later. Capturing Al to do this may not be acceptable to either the bird or to many of its followers.

Visitors to Point Arena can expect to see Al about half the time. Check the cove every couple of hours throughout the day for the best chance of sighting the bird.

A tabulation of Al's arrivals and departures follows, thanks to the Mendobirds list on Yahoo (groups.yahoo.com/group/MENDOBIRDS) and to Bob Keiffer for the summary.